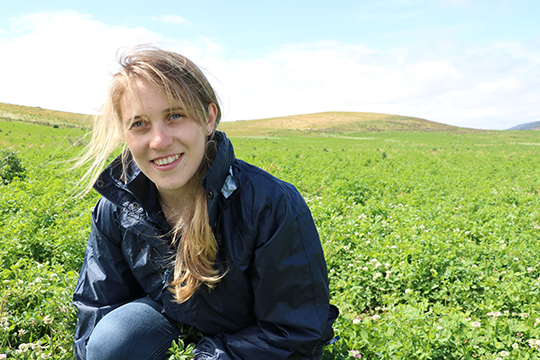 The opportunity to be part of the first Tasmanian team to compete at the Australian Intercollegiate Meat Judging Association (ICMJ) competition also saw Lauren Rowlands attend Red Meat 2019, thanks to an Integrity Systems Company (ISC) Scholarship.

Lauren, 22, was awarded the ISC Scholarship after competing at the ICMJ event at Wagga Wagga, NSW, in July, as part of the University of Tasmania team.  This is the second year ISC has sponsored the Scholarship as part of the ICMJ program, and ISC’s capacity building program.

Lauren has just completed a Bachelor of Agricultural Science with Honours at the University of Tasmania, and is a Biosecurity Inspector with Biosecurity Tasmania.

“It was an amazing opportunity to be a part of Tasmania’s first ICMJ competition team,” Lauren said.

“ICMJ was an incredible experience which opened my eyes to the scope and opportunities available in the red meat industry for careers, research, education and networks, and also made me more aware of how the industry is looking to progress into the future.”

“I haven’t been to a Red Meat event before, so it’s been amazing to be at the event and learn more about red meat production on a large scale and to meet more industry innovators and leaders, thanks to the scholarship provided to me through the Integrity Systems Company,” Lauren said.

“Dad is a shearer and his family are sheep producers, both for lamb and wool production, so I’ve grown up in the industry and I knew I liked science and that’s why I decided to pursue a career in agriculture.”
This year’s ICMJ event at Wagga Wagga marked 30 years of the competition, and featured more than 150 students from 12 Australian institutions, along with four international teams and some 40 coaches.

back to news & events